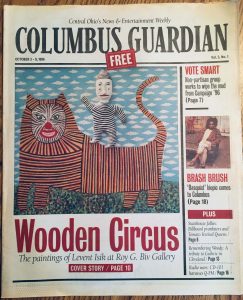 Three cans of paint sat on Levent Isik’s porch for weeks in 1989, left over from attempts to spice up a worn-out Schwinn 10-speed. One day, he found a piece of scrap wood near the street and took it into his apartment, where an uncharacteristically clean paintbrush sat in the sink, and his walls stood white and bare.

Outside of high school art classes and bar napkin doodling, Isik had never thought to draw or paint. But with the raw materials at his disposal and a head full of “sheer boredom and pathos,” he started to paint careful lines that soon became a jester in a striped and bubbled cloak.

At 29, Isik had just quit a steady job selling for a tool company in Cleveland. “I had baby hands. It was no-callous work,” he says. He had also broken up with a woman he was about to be engaged to. Shredding his ties to the life he had lived for seven years, he packed up and settled in Columbus, simply because it was the next major city on Interstate 71.

“I realized what I did after I left,” says Isik. “I had a lot of friends there: I knew the city like the back of my hand. I was alone in Columbus – I didn’t know anyone. I took that wood and leftover paint and unconsciously made the jester because that’s how I felt.”

Seven years later, Canadian-born Isik has become one of Columbus’ more successful resident artists. Hundreds of pieces of plywood have been transformed into his own wooden circus – boards adorned with playful wolves, fairy tale characters, statues of liberty, Adam & Eve, movie stars and clowns. Some are two-dimensional while others have dirt, bottle caps, or glass eyes embedded under oil paint, adding texture and character. Even the animals that appear menacing seem to have a sense of humor – alligators are as cunning as casino-running Mafioso caricatures, while little red riding hood looks as though she’s feigning distress just to fool the wolf.

An up-and-coming collector’s favorite, Isik’s work has merited gallery space not only in larger American cities, but in several other countries. Pieces have been shown in Germany, France, Belgium and Egypt, to name just a few. Next spring, he will be among the first 20th century artists to ever have work shown at the Aldrich Rockefeller Folk Art Center in Colonial Williamsburg, Virginia.

While firmly entrenched in Columbus’ art community, Isik spends most of his year painting pieces that go to galleries and special exhibitions across the country. Once a year, he puts together a show that includes approximately 25 pieces for a local gallery, usually one that has helped him in the past. His original jester makes an appearance at each of these shows, but will never be sold. He sells work directly out of the studio he calls home – a warehouse apartment in Olde Towne East’s Avery Building. Erected in 1909, the building was once the first Pontiac dealership in the world, a factoid Isik loves.

When Isik first began to paint, it didn’t occur to him to show his work in public. Most of the work was viewed solely by him and his house guests. After seven months without a job, his apartment was filling up with his paintings. 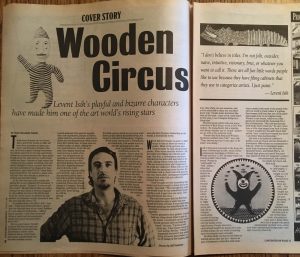 One day, a Greenpeace canvasser knocked on his doors and marveled at the walls, asking whose work Isik collected. (The environmentalist also happened to be a folk art collector.) When Isik told the man that the paintings were his own, the canvasser took a closer look and asked to buy one. Soon after, Greenpeace helped to connect Isik with folk art collectors around the state.

“I has thought art was something that moms and dads bought to hang above the couch,” says Isik. “The concept that someone would want to buy something I made and live with it just blew me away. That idea still blows me away.”

The canvasser gave Isik his first hint that he might be able to make his newfound love into a living. It was surprising, because painting was something that he discovered a ravenous passion for so haphazardly.

“I never painted to be a painter. I never had any ideas about what to put on the wood. I would pick up my paintbrush and just start moving my hand,” he says. “I’m not a religious guy. I don’t hear voices or God saying, ‘Do this.’ I think it just happened because it was something I’d never done before. A lot of things in life happen that way, like when you see someone and you’re attracted to them and you don’t know why. People make decisions like that all the time – some work, some don’t. In this case, I can’t imagine doing anything else.”

The first local exhibit Isik saw was a a collection of Rick Borg’s work at Doo Wac Gallery. He immediately felt a kinship with Borg’s similar use of “found” materials, as well as his painting style.

“People like Rick Borg and William Hawkins justified what I did,” says Isik. “They showed me it was okay to do what I was doing.”

Isik’s first show was held at the King Avenue Coffeehouse, which led to subsequent showings at places like Waldo’s on High and Roy G. Biv. In many ways, his timing couldn’t have been better. Works by “self-taught” or “folk” artists – titles that could be immediately applied to Isik’s work – became a near-mania for art collectors in the early 1990s that has yet to subside. He attributes much of his success to having his work fall into the hands of the right buyers. People who have enjoyed and bought his paintings have also worked within the art world at making their investment more valuable.

He often finds that he has been exhibited somewhere after the fact – shown as part of someone’s collection. Isik maintains contact with most of the people who own his work to keep track of where it’s going. One woman told him that that one of his paintings hangs next to an original Andy Warhol in her house, while two more of his paintings hang like bookends for a Roy Lichtenstein. “She told me that my stuff looks better than his,” he says, more than a little slap-happy from lack of sleep. “I wish I would have thought about that earlier, then I could have named my show ‘I am better than Lichtenstein.'”

Isik is also included in collector’s guides, such as Chuck and Jan Rosenak’s prestigious 1996 volume on contemporary folk art, where he is cataloged pages away from “self-taught” luminaries like Hawkins, Howard Finster, and Elijah Pierce. But while high-gloss pictures of his paintings appear in Folk Art magazine’s gallery advertisements, Isik resists the labels he’s been saddled with.

“I don’t consider self-taught a title. I’m self-taught in a lot of things. I learned how to wash, dress myself… I’ve been self-taught my whole life,” he says, laughing. “If you take classes, teachers talk and they grade, but once you’re out of that classroom, you paint on your own. I think there are a lot of people who paint passionately on their own – whatever their educational background – and that’s exactly what I do.

“I don’t believe in titles. I’m not folk, outsider, naive, intuitive, visionary, brut, or whatever you want to call it. Those are all fun little words people like to use because they have filing cabinets that they use to categorize artists. I just paint.”

A fairer assessment of Isik’s success is the broad human appeal of his paintings. His characters are like children constantly thrusting themselves into the uncharted adult world; as naive as they are wise, they come across as brave, proud and unashamed. His skies are filled with homey lines, jig-jags or dots rather than ordinary stars – a labor-intensive part of his work that is as essential to his style as the animals themselves. 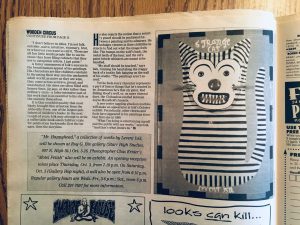 It is that youthful quality that most likely brought him attention from the Abbeville Press, one of the largest publishers of children’s books in the world. In the next couple of years, Isik may attempt to write a children’s tale for publication backwards: first the images, then the storyline.

He also rejects the notion that a security guard should be planted between a painting and its admirers. He indulges viewers in their child-like instincts to find out what the image feels like. The bumps on the wolf’s back, the metal teeth of the bear and the cat’s paint-bristle whiskers are meant to be handled.

“My stuff should be touched,” says Isik, running his hand over the craggy back of a toothy fish hanging on the wall of his studio. “The paintings aren’t sacred.”

Yet he feels every character represents a part of him or things that he’s wanted to be. Sometimes he’s that sly gator, Red Riding Hood’s wolf, or, on more visceral days, the Chihuahua nestled between Jayne Mansfield’s breasts. A new jester juggling glued-on marbles will make an appearance at Isik’s October exhibit. Periodically, other clowns and fools have appeared in his paintings since the first in 1989.

“What I’m doing is entertaining myself and the public with my works,” says Isik. “And that’s what jesters do.”

A version of this story first appeared in the Columbus Guardian on October 3, 1996.
This story is © Tracy Zollinger Turner, it cannot be reprinted without her express, written permission